What’s the difference between Fast-Action-Takers and there are “fence sitters” in life?

A good friend of mine did a study that was done on high performing high income people and in the study they were looking for commonalities, what people do that got them such great results and the one factor that made the biggest difference was speed of implementation.

When they got a good idea or when they learned something new that was good, they immediately put it into action, they implemented, the operationalized it.

They took it out of their head and they put it in the world, they did something with it like writing it down, calling someone or creating a new idea.

Now unfortunately most people do not implement quickly. They ruminate and they think about things and they say aww maybe I’ll do it later. They have slowness of implementation and that’s why most people don’t get good results.

Fear of failure, perfectionism, paralysis of analysis. All of these  things block us from just taking action

If you’re not taking immediate action on your ideas whether you make a note to do something later, you likely have the habit of waiting on things and over thinking.

Each time you have an opportunity to take action and implement a new idea, ask yourself “if not now when” and then do something right away.

Copyright 2020. All rights reserved.
This website is designed by Magenta Design 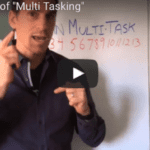 How to avoid the danger of "Multi Tasking"Blog